The albacore tuna is an epipelagic and mesopelagic, oceanic species, rich in surface waters of 15.6º to 19.4ºC; large albacore tunas are found in water temperatures of 13.5º to 25.2ºC; temperature as low as 9.5ºC may be tolerated for short periods of time.

It is one of the larger species; the body is at its deepest at a more posterior point than in other tuna species. The albacore’s first arch consists of 25 to 31 gill rakers. The second dorsal fin clearly lower than first dorsal; pectoral fins are remarkably long, it is usually 30% of fork length or longer in 50+ cm fishes, they are reaching well beyond origin of second dorsal fin. Fish that are smaller than 50 cm will have proportionately smaller pectorals than other tuna species. 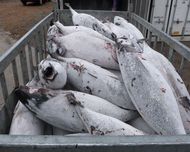 Albacore tunas are a fast growing tuna in the beginning but more slowly with age, it can weigh up to almost 36 kg and a length up to 119 cm long. It feeds near the top of the food chain, preying upon a variety of fish, crustaceans, and squid. They’re also prey for many top predators, including sharks, rays, larger tunas, and billfishes.

In the Pacific Ocean, maturity may be attained at about 90 cm in females and at about 97 cm fork length in males; in the Atlantic Ocean it is reached at about 94 cm in both sexes.
In the subtropical waters of Pacific Ocean centered around the 20o N and 20o S latitude, peak spawning of albacore tuna is generally believed to be occurring. From March through July on the grounds located in the western and central Pacific Ocean it is assumed where the North Pacific albacore stock spawns.

Albacore tuna are believed to be pelagic spawners that broadcast their gametes in open water, often near the surface, with fertilization being externally done. An estimation of female fecundity (number of eggs) range from 0.8 to 2.6 million eggs per spawning (roughly 100,000 eggs per kg of body weight). The eggs are approximately 1 mm in diameter and remain buoyant by an enclosed oil droplet and develop very rapidly, with hatching occurring within 24 to 48 hours.

The International Union for the Conservation of Nature and Natural Resources (IUCN) has not re-assessed the albacore species in over 10 years. IUCN listed the Albacore tuna 2011 on their “red list” under the category Near Threatened. Several stocks are fished below current maximum sustainable yield (MSY).