There are at two subspecies of the Northern Bluefin, one in the Atlantic and one in the Pacific:

The Atlantic Bluefin is found from Labrador and Newfoundland south into the Gulf of Mexico and the Caribbean Sea and is also found off Venezuela and Brazil in the western Atlantic. In the eastern Atlantic the Atlantic Bluefin occurs from the Lofoten Islands off Norway south to the Canary Islands and the Mediterranean Sea. There is also some population off South Africa.

Adults are typically 3m in length, but can reach 4m, making the Atlantic tuna one of the largest bony fishes and the largest of all tuna species. Adults average 130-680kg, although the upper weight range is rarer now.

Northern Bluefin tuna are built like torpedoes. Not only do they have a hydrodynamic shape, their pectoral (side) fins can be retracted and, unlike other fish, their eyes are set flush to their body. This means their bodies create little drag as they swim through water.

Very large species, first dorsal fin is near to the middle. Gillrakers 34 to 43 on first arch, the second dorsal fin is higher than the first one. Their pectoral fins are very short less than 80% of head length. 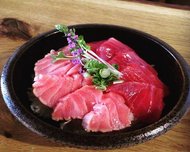 Northern Bluefin tuna spawn just once a year and do not reach reproductive maturity until they are 8-12 years old. This makes this tuna species more vulnerable to overfishing than some of the smaller tuna species that can spawn several times in a year.

Large adults (age 10+) are known to spawn in the Gulf of Mexico and in the Mediterranean Sea. In the Pacific spawning occurs northeast of the Philippines. Females weighing between 270 to 300 kg may produce as many as 10 million eggs per spawning season.

The International Union for the Conservation of Nature and Natural Resources (IUCN) listed Northern Bluefin in their “red list” 2011 under the category Endangered.